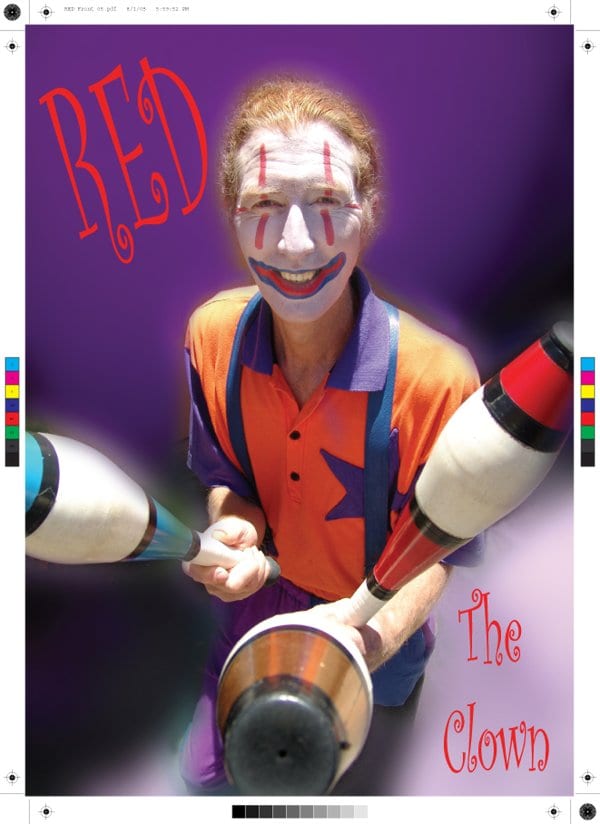 Skills: Magic, unicycling, clowning, juggling, ballooning, songs, comedy
Description: RED'S work is individual, great fun and speaks for itself with over 300 performances per annum throughout Victoria and interstate. With a career spanning two decades, Red has earned himself a reputation for being one of Australia’s most renowned clowning characters.

Red performs shows that have a generic appeal across the age ranges or will design his show for specific age groups. The shows are predominantly magic interspersed with juggling, jokes, lots of opportunity for audience participation and a particularly scary balloon trick involving a rather large needle. Red also performs roving entertainment with great close up magic, unicycling, juggling and balloon modelling as he circulates throughout the event and, without fail, bringing laughter and smiles to all those he encounters.
RED has performed for - almost every Melbourne festival, Darwin Festival, Adelaide Festival, Alice Springs Winter Festival, Brisbane FREEP, Young Talent Time, Moomba, FEIPP, Hey, Hey, It's Saturday as well as Schools, Libraries, Kindergartens and Shopping Centres and Parties too numerous to mention. Red has also been the resident compare of the Children's Tent at the Port Fairy Folk Festival for the past decade.