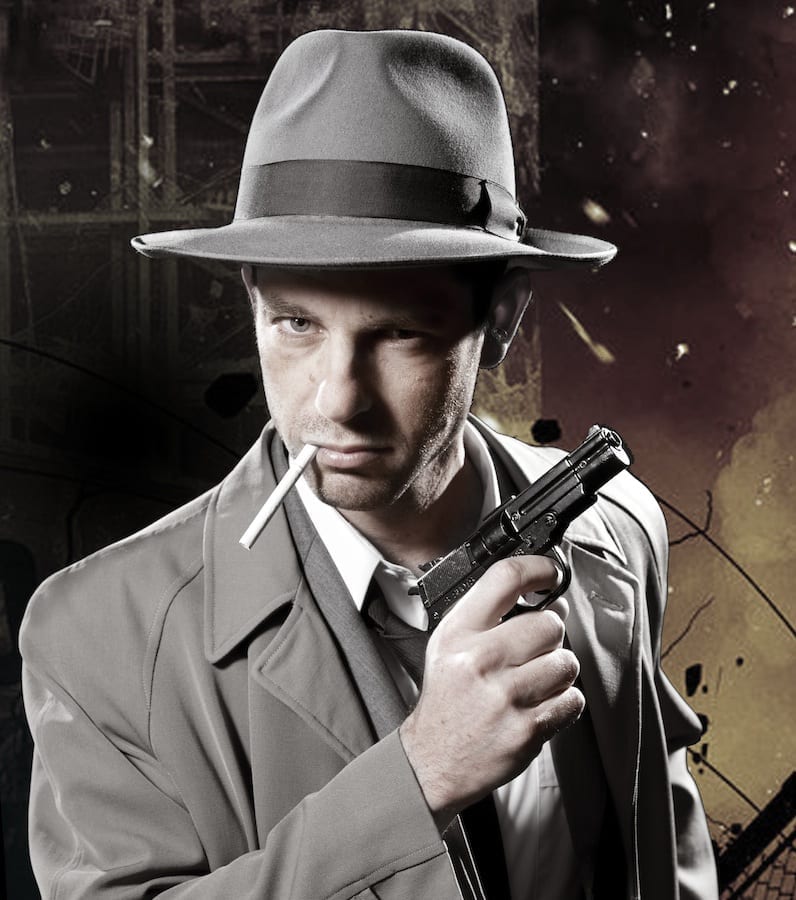 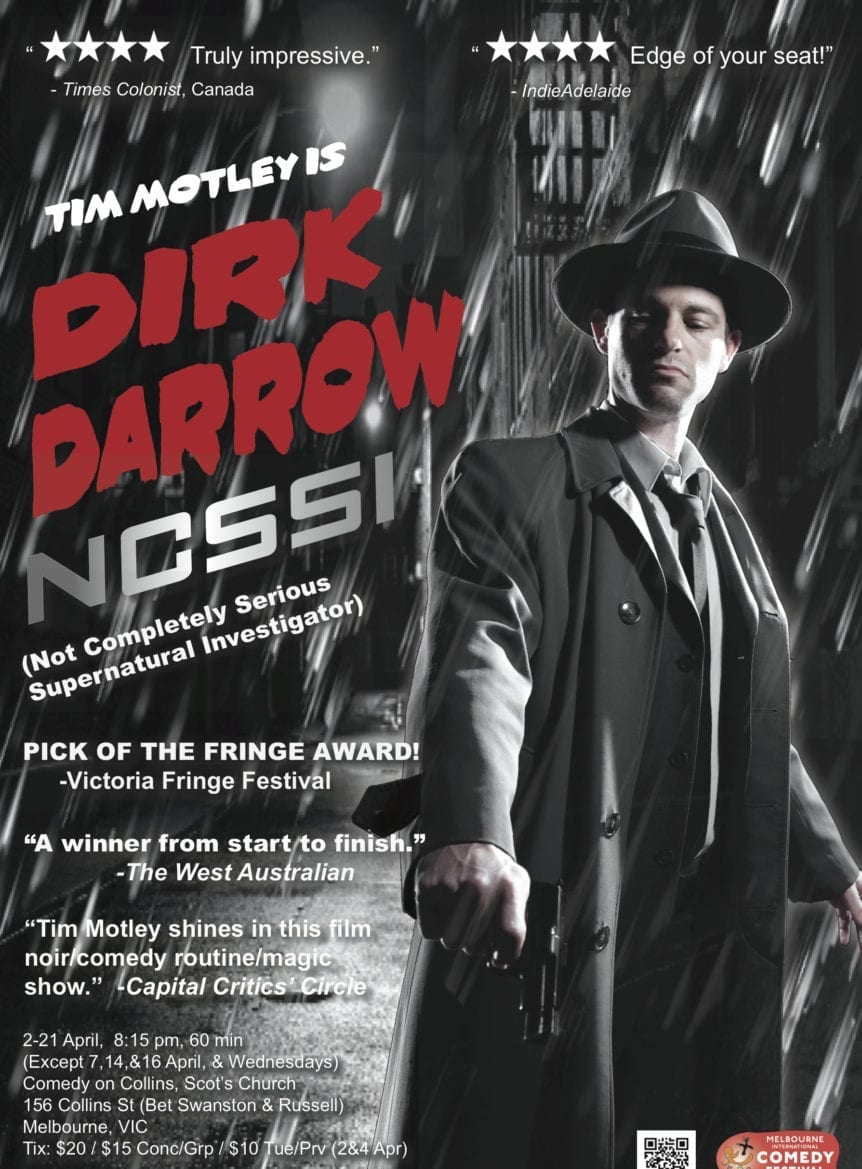 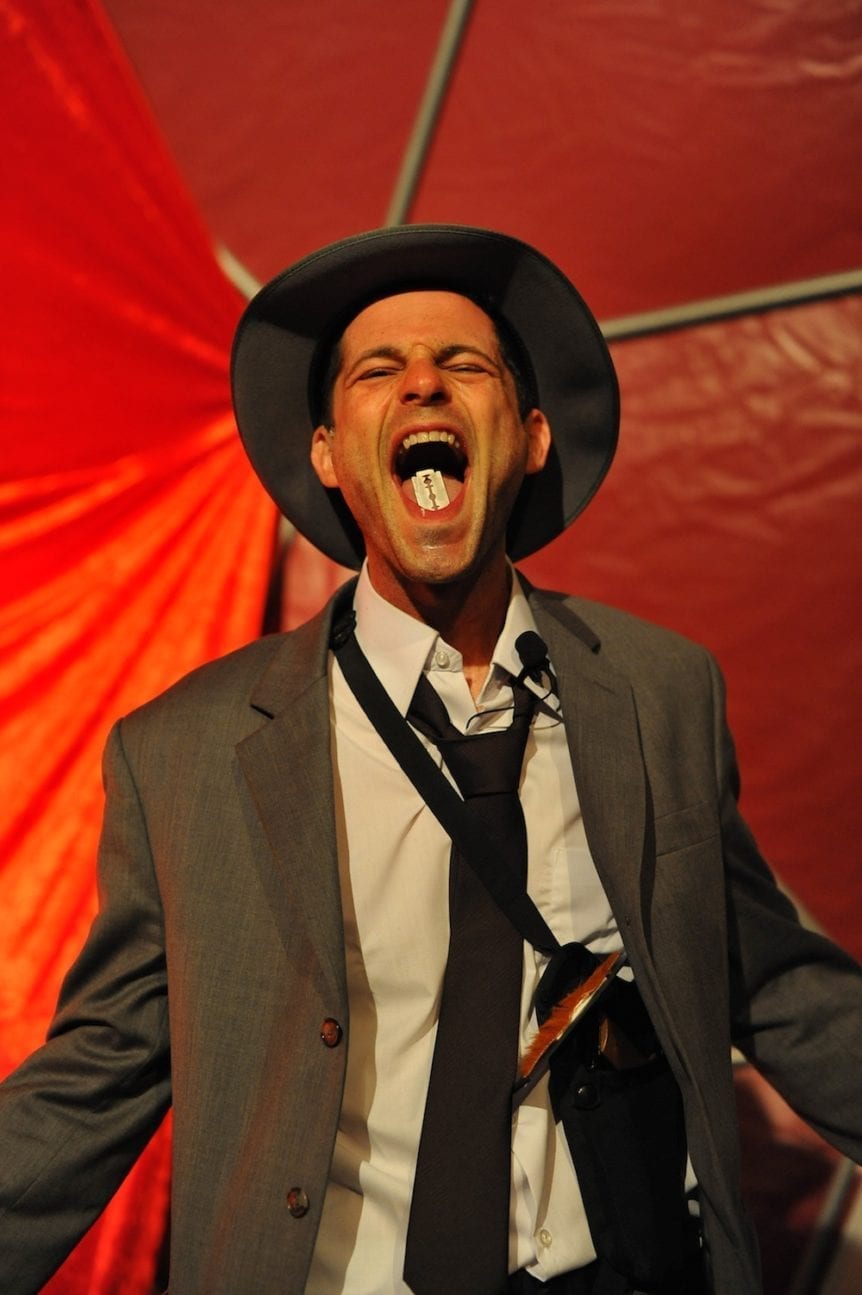 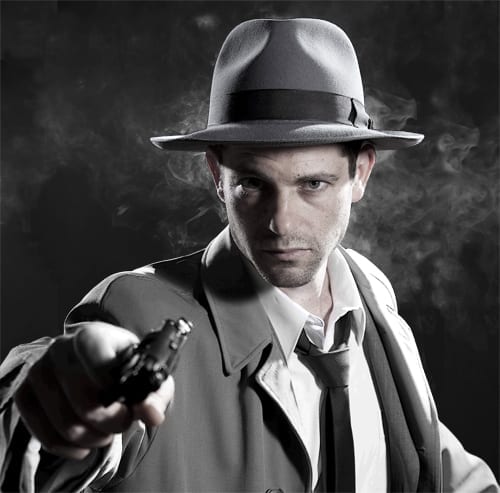 Description:
The sell-out hit of Adelaide Fringe Festival 2011 & 2014 and Melbourne International Comedy Festival 2013, among more than a dozen other international festivals, Dirk Darrow has arrived in Melbourne! Fresh off a world tour and here to stay, Australia’s funniest American detective is hot on the trail of a killer... show!

Follow the trail of a killer through murky paranormal city streets in the world’s only one-man comedy film noir magical murder mystery! In a gadget obsessed age, this show takes a step backwards in time to the feel of the 1930‘s while keeping the cutting edge humour of a modern comedian. Part stand-up, part whodunit, part mentalism, all glorious retro film noir, Dirk Darrow engages audiences in a performance experience unlike any other.

Experience the thrill of solving the crime while marvelling at Dirk’s seemingly impossible deductions gathered from clues provided by the audience. This is an ambitious show, uniquely integrating magic into a story without losing the plot.

Dirk Darrow is in fact 2 separate sellout hit theatrical shows in Theater, Fringe, and Comedy festivals throughout Australia, Canada, and the USA. These shows are Dirk Darrow: NCSSI, and 2 Ruby Knockers, 1 Jaded Dick! While both certainly are for hire in their native 60 minute set versions (or even the extended 90 minute versions - don’t laugh, it’s been requested), most events will want something more adaptable. Hence, the “gig version” of Dirk Darrow is the most popular for hire. In this adaptation, Dirk Darrow draws on the immense stand up and crowd work experience of the performer who plays him (Tim Motley) to do a “walk on, walk off” versatile act with no special tech requirements or time constraints. He’ll simply tell some jokes, set the mood, work the crowd, and do a few mind-boggling mentalism or magical effects. Standard show length for the “gig version” is 30 minutes, but has been done in as short as 1 minute to as long as 90 minutes, as requested by the client.

“If you squint, you’d swear he was Brad Pitt." - The StarPhoenix, Canada

"If you’re looking for something a little different to the typical standup shows of comedians like Arj Barker and Josh Thomas, then get along to Dirk Darrow. It’ll have you on the edge of your seat for the entire performance, and leave you wanting to go back and see it all again."
- IndieAdelaide

"Dirk Darrow: NCSSI is a funny and impressive one-man show. Motley is a talented performer who has created a great comedy character in Dirk Darrow. Lovers of Noir, mentalism or character based comedy should make sure to join the private eye for his next investigation."
- Perth Now

"Tim Motley shines in this film noir/comedy routine/magic show... a great performance that had the audience laughing from start to finish."
- Capital Critics’ Circle, Canada

"Tim Motley is spellbindingly funny and a compellingly excellent storyteller... One of my favourite acts I’ve seen this Fringe, this is a show not to be missed."
- The Heckler

"The bits of magic and overall noir spoof work so well it’s hard not to like his patter. Imagine Penn and Teller as Sam Spade’s bastard offspring, and you’ve got a good idea of what’s in store from this hilarious Not Completely Serious Supernatural Investigator."
- CVV Magazine, Canada

"Motley is clever, tricky, funny, and a dick… [He] kept us somewhere between balancing on the edge of our seats in suspense, and falling off them with laughter. Motley is not pulling a fast one when he claims this is a unique show."
- Glam Adelaide

"Dirk Darrow is a mutant hybrid of stand-up comedy, magic show, drug inspired interpretive dance piece and a sublime farce of film noir... What sells the show is Tim Motley’s charisma and how he manages to fully engage the audience."
- Monday Magazine, Canada

"I enjoyed every second of the show, and was disappointed to have it end."
- Adelaide ArtBeat

Dirk Darrow’s creator, Tim Motley, has performed professionally for 17 years throughout 28 countries from shantytowns and riots in South Africa to celebrity audiences such as Richard Branson, Baz Luhrmann, and Lachlan Murdoch. Tim has featured with other shows at dozens of European and Canadian festivals while also having appeared as a stand-up comic on Melbourne’s Channel 31 many times. His exploits also include being a radio DJ for RRR Melbourne and URE England. Previous clients include Nestle, Disney, and David Jones, among many others